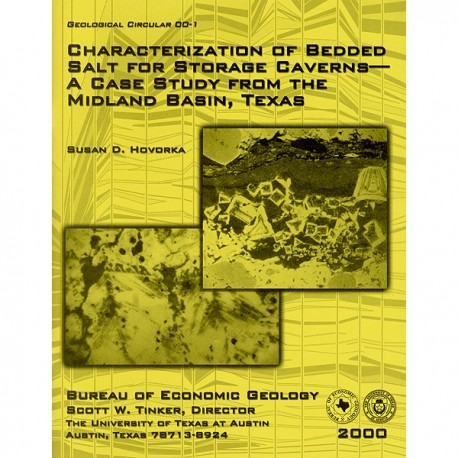 GC0001. Characterization of Bedded Salt for Storage Caverns - A Case Study from the Midland Basin, Texas


To purchase this publication as a PDF download, please order GC0001D.

About This Publication
This circular describes the geometry of the Salado salt in the Midland Basin of West Texas, one of the best-known sedimentary basins of the world. The author advocates using geologically based interpretation of depositional and dissolution processes as a tool for mapping the geometry of salt to assess the suitability of sites for developing solution-mined storage caverns such as have been used for disposal of oil-field wastes. Funding for this study was provided by the National Petroleum Technology Office of the U.S. Department of Energy.

ABSTRACT
The geometry of Permian bedded salt in the Midland Basin is a product of the interaction between depositional facies and post-depositional modification by salt dissolution. Interpretation of high-frequency cycle patterns in cross section and map view inferred from wireline logs documents the salt geometry. Geologically based interpretation of depositional and dissolution processes provides a powerful tool for mapping the geometry of salt to assess the suitability of sites for development of solution-mined storage caverns. In addition, this process-based description of salt geometry complements existing data about the evolution of one of the best-known sedimentary basins in the world and can serve as a genetic model to assist in interpreting other salt basins.

Solution-mined caverns in salt in the Midland Basin Salado Formation are low-cost, large-volume storage facilities used for chemical feedstock. Caverns are also created when salt is dissolved to produce sodium chloride brine for drilling mud and other applications. Recently, solution-mined caverns have been used for disposal of oil-field wastes. This log-based regional analysis of salt character provides basic descriptive information on the geometry of salt needed to site and regulate the development, use, and decommissioning of these facilities in the context of an exploration of facies relationships and implications for depositional history in this part of the Permian Basin.

Three regional trends are recognized in the Permian Salado Formation of the Midland Basin: (1) The thickest (700 ft of net salt) and most extensive salt units in the lower part of the Salado Formation show a strong and consistent regional thickening toward the southwest across the Central Basin Platform toward the Delaware Basin, reflecting accommodation resulting from subsidence in the Delaware Basin depocenter. Typical salt beds (10 to 30 ft thick) are interbedded with mudstone and mud-salt beds (3 to 10 ft thick). Anhydrite beds (2 to 30 ft thick) separate the salt-mudstone units into 5 to 10 intervals (50 to 350 ft thick). (2) Toward the upper part of the Salado Formation, salt beds are variable in thickness and discontinuous in lateral extent, and they pinch out toward the Midland Basin margins. This geometry is interpreted as the result of complex depositional patterns that developed toward the end of basin filling as well as salt dissolution beneath the sequence boundaries preceding and following Alibates deposition. (3) Salt beds have been thinned as a result of ongoing postdepositional dissolution toward the east structural margin of the Midland Basin where salt is near the surface.

Purpose and scope of study

Previous work: geologic setting of the bedded salt in the Permian Basin

Regional geometry of bedded salt in the Midland Basin

Case study 1: Permian facies controls on salt thickness on the north margin of the Midland Basin

Case study 2: Post-Permian dissolution at a structural positive on the east basin margin

1. Location map of salt in Texas and distribution of permitted salt caverns used for storage

2. Well and cross-section location map of the 31-county study area

8. Type log through the Yates, Tansill, Salado, and Alibates Formations

12. North-south cross section of the Salado Formation and associated units in the Midland Basin

13. East-west cross section of the Salado Formation and associated units in the Midland Basin

14. Structure on top of the Salado salt-bearing interval

16. Generalized depth to top of Salado salt-bearing interval from approximate land surface based on log datum and generalized 1:250,000-scale topographic maps to top of Alibates Formation

19. Halite dissolution in the depositional environment as a result of flooding

20. Halite dissolution in the depositional environment as a result of exposure

21. Dissolution at the bases of cycle or sequence

27. Breccia interpreted as a result of formation and collapse of natural salt caverns

29. Detail of north-south stratigraphic cross section in the deep part of the northern Midland Basin showing salt-character changes controlled by Permian facies change and base of sequence dissolution

32. Detail of east-west stratigraphic cross section near the east edge of the Midland Basin showing salt-character changes controlled by post-Permian dissolution over the Capitan Reef trend