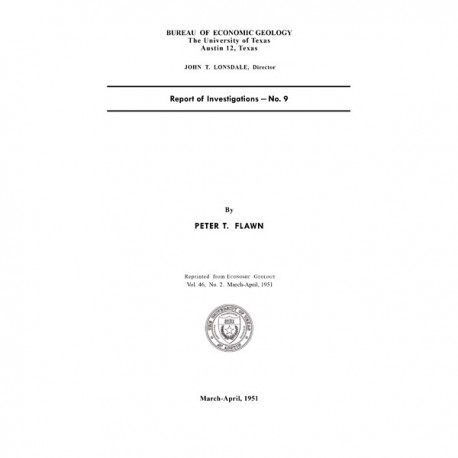 
ABSTRACT
Zoned and unzoned perthite-quartz-plagioclase-muscovite pegmatites in the form of tabular bodies, irregular bodies with tabular branches, irregular masses, elongate lenses, lit-par-lit zones, and small augen and stringers are distributed throughout the Precambrian metasedimentary rocks of the Mica Mine area, Van Horn Mountains, Texas. Zoned bodies have a core of erthite and quartz and a plagioclase-quartz-perthite-muscovite wall zone. The pegmatites contain numerous schist inclusions, and some show evidence of contamination by biotite schist and amphibolite.

Intimate penetration of the host rock by pegmatite fluids was accomplished by a combination of dilation and digestion. Dilation was effected by injection pressure and (to an unknown degree) orogenic stresses. Crystallization of a solution containing a large excess of potash took place in a closed or restricted system where a delicate balance of solubility factors was maintained for long periods or in a solution of low viscosity, thus facilitating growth of large crystals about a limited number of centers.

Zoning and textural relationships are accounted for under these conditions. The importance of horizon and mode of emplacement in the formation of pegmatite textures and shapes is emphasized. A review of the granitization, palingenesis or anatexis, open-system (or aqueous), and magmatic theories of pegmatite origin shows that the features of Mica Mine pegmatites are best explained by the magmatic theory.

The Mica Mine area has possibilities of exploitation for feldspar and scrap mica.

[There is no Table of Contents in this document.]


Citation
Flawn, P. T., 1951, Pegmatites of the Van Horn Mountains, Texas: The University of Texas at Austin, Bureau of Economic Geology, Report of Investigations No. 9, 30 p.