> Books & Reports>Reports of Investigations>Hydrogeology of the Northern Segment of the Edwards Aquifer, Austin Region 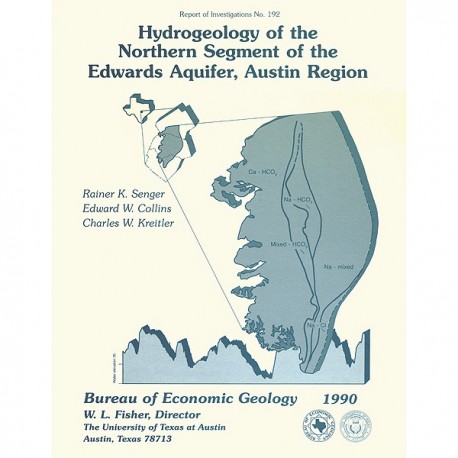 Hydrogeology of the Northern Segment of the Edwards Aquifer, Austin Region

For a downloadable, digital version: RI0192D.

To purchase this publication as a downloadable PDF, please order RI0192D.

ABSTRACT
Geologic mapping and fracture analysis of the Lower Cretaceous Edwards aquifer strata near Georgetown and Round Rock, Texas, were performed to provide a better understanding of the geologic framework of the Balcones Fault Zone and to provide information for assessing ground-water flow characteristics. Cretaceous strata dip gently eastward and are locally overlain by terrace deposits and alluvium. Several major normal faults, downthrown to the east, strike northward across the area. Gentle flexures, possibly related to faulting, parallel the faults. Minor normal faults and joints are most abundant in areas adjacent to major faults and flexures. These fractured-strata zones probably parallel the length of the faults or flexure axes and may be as wide as 1 mi (1.6 km).

Water-level, precipitation, and hydrochemical data were studied to characterize the hydrogeology of the northern Edwards aquifer. The potentiometric surfaces for conditions of high flow and low flow indicate a regional flow system that is noticeably affected by Balcones faults along the north and south edges of the northern segment of the Edwards aquifer. In the Georgetown area where faults are less abundant, regional ground water generally flows eastward, following approximately the dip of the stratigraphic units. Ground-water flow circulation is faster in the western part of the aquifer than in the eastern part. Main discharge for the western, fast-flowing system occurs along fractures through springs and seeps at the major creeks and rivers in the Georgetown area. Some recharge water moves farther downdip past these springs, where water levels show large seasonal variations due to reduced transmissivity and storativity of the aquifer.

The hydrochemistry of Edwards ground water indicates an evolution of ground water from a Ca-HCO, and Ca-Mg-HCO, to a mixed-cation-HCO, farther downdip to a Na-HCO, and finally to a Na-mixed-anion-type water. The hydrochemical evolution of ground water along the flow path indicates congruent and incongruent reaction of recharge water with limestone, resulting in a decrease in Ca/Mg ratios. Tritium concentrations are relatively high in the unconfined part, indicating that ground water was recently recharged. In the confined part, Ca decreases owing to cation exchange, causing an increase in Na. Gypsum dissolution in addition to influx of Glen Rose ground water causes SO, concentration to increase, and mixing with Na-Cl-type water results in both Na and Cl increase. The Na-Cl component in the Na-mixed-anion-type water in Williamson County, where faults are less abundant, may represent connate, interstitial water, as suggested by Sr data. However, Na increases disproportionately to Cl because of cation exchange. Ca ions, derived from gypsum dissolution, are probably exchanged for Na on clay minerals, although shale occurs only as relatively thin layers within the Edwards Limestone. In the confined part of the aquifer, large fluctuations in the potentiometric surface cause seasonal reversals in the vertical flow component. These thin shale layers within the Edwards aquifer strata represent large surface areas for vertical flow; thus, the high Na concentrations can be attributed to cation exchange.

Comparison with the southern aquifer segments

Hydrochemical implications of flow through the Georgetown Formation

1. Regional structural setting of the Balcones Fault Zone
2. Map of the Edwards aquifer outcrop belt and location of monitoring wells and rain gauges

4. Stratigraphic column of Cretaceous rocks of the northern segment of the Edwards aquifer, Austin region

7. Distribution and geometries of major faults and flexures, minor faults, and joints exposed along the North Fork of the San Gabriel River

10. Water-level hydrographs of several wells in the study area

11. Water-level hydrograph of well 58-27-305 based on daily measurements and graph of monthly rainfall amounts in the area

12. Monthly pumpage volumes by the cities of Round Rock and Georgetown

16. Daily water-level hydrographs based on continuous recordings for well 58-35-110

22. Piper diagram of ground water from the Edwards aquifer

23. Geographic distribution of water types and total dissolved solids in the Edwards aquifer

24. Geographic distribution of fluoride concentrations and water types in the Edwards aquifer

25. Geographic distribution of nitrate concentrations and water types in the Edwards aquifer

30. Plot of molal concentrations of Na versus Ca

31. Plot of molal concentrations of Na versus Cl

32. Plot of Na-Cl (molal) versus molal concentration of SO4

33. Log of molal concentrations of Sr versus Cl for the confined part of the central segment in the San Antonio region, the Barton Springs segment, and the northern segment

34. Log of molal Sr concentrations versus Ca/Mg ratios for all sections of the Edwards aquifer

2. Results of chemical analyses of water samples collected during this study