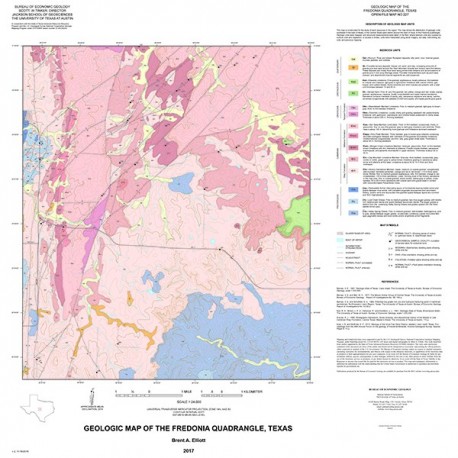 Geologic Map of the Fredonia Quadrangle, Texas, by B. A. Elliott. Oversize geologic map on a color topographic base, map scale 1:24,000, 2017. Print Version.

For a downloadable, digital version: OFM0227D.

To purchase this publication as a downloadable PDF, please order OFM0227D.

About This Publication
This map is constructed for the study of sand resources in the region. The map shows the distribution of geologic units southeast of the town of Brady, in the Central Texas sand district around the town of Voca, in the Fredonia quadrangle. Geologic units were mapped, and structural measurements were taken in the field; where bedrock units are covered by surficial units and vegetation, or access is limited, units were interpreted using aerial imagery, soil data, well-drilling records, and previous mapping.