> Books & Reports>Reports of Investigations>RI0262. Structure and Evolution of Upheaval Dome... 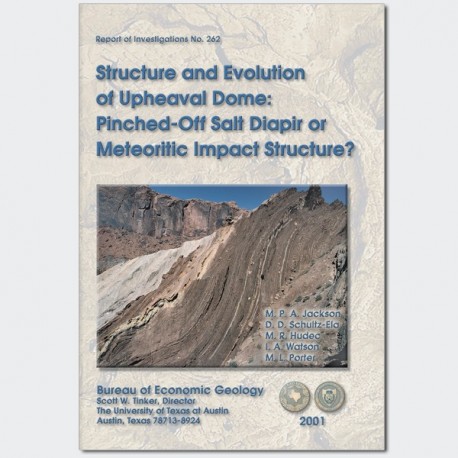 To purchase this publication as a downloadable PDF, please order RI0262D.

ABOUT THIS PUBLICATION
Upheaval Dome remains one of the most enigmatic structures in North America. Ongoing debate continues about whether the structure is a deeply eroded meteor-impact structure or a pinched-off salt dome. This report presents the case for the salt-dome hypothesis and critically evaluates the arguments on both sides of the debate.

ABSTRACT
Upheaval Dome (Canyonlands National Park, Utah, is an enigmatic structure previously attributed to underlying salt doming, cryptovolcanic explosion, fluid escape, or meteoritic  impact. We instead propose that an overhanging diapir of partly extrusive salt was pinched off from its stem and subsequently eroded. Many features support this inference, especially synsedimentary structures that indicate Jurassic growth of the dome over at least 20 m.y. Conversely, evidence favoring other hypotheses is sparse and equivocal.

We infer that abortive salt glaciers spread from a passive salt stock during the Late Triassic and Early Jurassic. Later, during the Middle Jurassic, the allochthonous salt spread into a pancake-shaped glacier inferred to be 3 km in diameter. Diapiric pinch-off may have involved inward gravitational collapse of the country rocks, which intensely constricted the center of the dome. Sediments in the axial shear zone beneath the glacier steepened to near vertical. The central uplift is inferred to be the toe of the convergent gravity-spreading system.

Hypotheses for Origin of Upheaval Dome

COMPARISON OF EVIDENCE FOR IMPACT VERSUS PINCH-OFF

Positive Evidence Compatible with Both Pinch-Off and Impact

Positive Evidence Compatible with Pinch-Off but not with Impact

Multiple Episodes of Fracturing and Cementation

Presence of Steep Zones in Inner Limb of Rim Syncline

Positive Evidence Compatible with Impact but not with Pinch-Off

Absence of Rock Salt at the Surface

Paucity of Nearby Piercement Diapirs

Negative Evidence Compatible with Pinch-Off but not with Impact

Paucity of Planar-Deformation Structures in Quartz

Absence of Shock-Metamorphic Minerals
Absence of In Situ Breccia

5. Structure-contour map of Upheaval Dome and surroundings, showing the base of the Wingate Formation

6. Schematic illustrations of hypotheses supporting meteoritic impact and salt-dome pinch-off as explanations for the evolution of Upheaval Dome

8. Stratigraphy viewed from the rim monocline in an undeformed area immediately south of Upheaval Dome

9. Photograph illustrating our descent route down the Wingate Formation escarpment toward the inner depression

13. Linear cross section of B-B' of Upheaval Dome and surroundings as inferred from surface exposures and projection from Buck Mesa well

15. Photograph illustrating view east from the valley that approximately follows the rim syncline on the southwest part of Upheaval Dome

16. Northwest-southeast cross section D-D' of Whale Rock, in the southeast part of dome, showing abrupt, anomalous steepening of Navajo dips on the inner limb of the withdrawal syncline

17. West-northeast cross section of panorama 9 traced from photographs of Holeman Spring alcove and adjoining exposures farther west on the south side of Upheaval Dome, photograph of similar view, and schematic reconstruction of synsedimentary deformation of Wingate Formation

18. Photograph illustrating northward view of radial growth folds in Lower Wingate sandstone in the northeast cliffs of the inner depression

19. Photograph illustrating southwestward view of a growth fault in cliff-forming Wingate Formation on the south wall of alcove A

24. Oblique air photograph illustrating southwestward view of alcoves B and A

25. Panorama comprising three photographs along the east wall of the major valley adjacent to the syncline on the west to southwest side of Upheaval Dome

27. Photograph of outward-verging normal faults diagrammed in panorama 2 of figure 20

30. Views of dog tongues and intervening radial anticlines in southwest and west walls of inner depression

32. Minor structures exposed in a folded thrust sheet in the southwest part of the inner depression

35. Photograph, looking south at the center of Upheaval Dome

36. Branching of a clastic dike at its termination

37. Clastic dikes in the center of Upheaval Dome. showing both concordant and discordant relations with enclosing sedimentary layers

39. Pinched-off diapir imaged by reflection seismic in the Gulf of Mexico

40. Microfractured quartz in White Rim clastic dikes from the core of Upheaval Dome

41. Air photograph of Dome 16 in the Great Kavir salt desert of Central Iran

42. Schematic reconstruction of the salt-tectonic evolution of Upheaval Dome