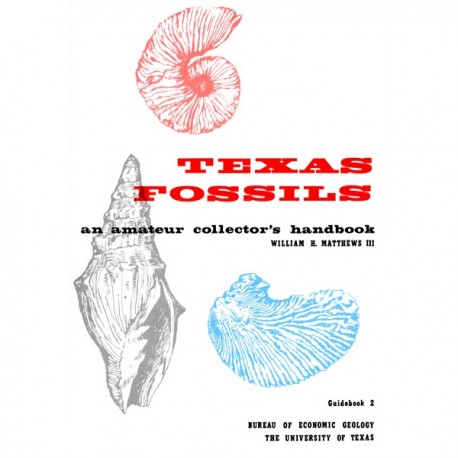 Designed for use by fossil collectors, students, and teachers, this excellent guidebook is a classic introduction to the fossils of Texas. Since its original publication over 60 years ago, Texas Fossils has been a consistent best seller with tens of thousands of copies printed and sold:

"Almost everyone has seen the fossilized remains of prehistoric plants or animals. These might have been the skeleton of a gigantic dinosaur, the petrified trunk of an ancient tree, or the shells of snails or oysters that lived in the great seas that covered Texas millions of years ago. Each year more and more people are learning that these fossils are more than mere curiosities. Instead, they are realizing that a good collection of fossils provides much information about the early history of our earth, and that fossil collecting can be a most enjoyable, fascinating, and rewarding hobby. It is for these people that Texas Fossils was written.

This publication is primarily an amateur collector’s handbook and as such offers many suggestions and aids to those who would pursue the hobby of fossil collecting. It tells, for example, what fossils are, where and how to collect them, and how they are used. Suggestions are made as to how the specimens may be identified and catalogued, and there are discussions and illustrations of the main types of plant and animal fossils. Included also is a simplified geologic map of Texas and a brief review of the geology of the State."