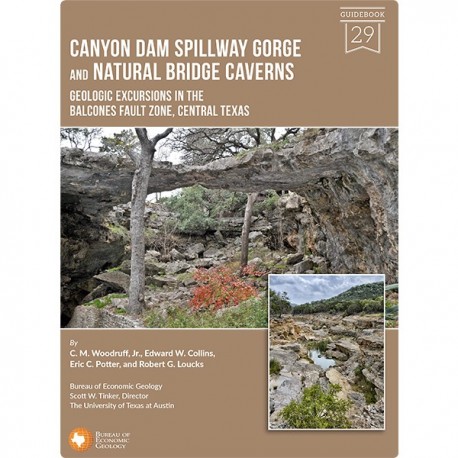 Excerpted from the Preface
The Central Texas Hill Country—a region noted for the beauty of its landscapes and its rich cultural heritage—is one of the top tourist destinations in the state. Here, spring-fed streams cut limestone strata and reveal a wealth of natural treasures: perennial watercourses sustaining towering bald cypress trees below limestone bluffs, tributaries draining side canyons with hidden grottoes, and upland oak–juniper savannahs with caverns containing underground wonders. Although such destinations occur close to cities and towns adjacent to the Hill Country, notable geologic, biological, or cultural features of this region are often not recognized by those who live nearby or come to visit.

This guidebook focuses on two spectacular geologic sites, Canyon Dam Spillway Gorge and Natural Bridge Caverns, both of which occupy the Balcones Fault Zone in Comal County between Austin and San Antonio. These sites provide contrasting views of the limestone terrains west of the Balcones Escarpment, the break in the land that cuts through Central Texas and marks the eastern edge of the Hill Country. Even though the two sites occupy roughly the same sequences of bedrock strata, all of Cretaceous age. The different processes that acted on these strata produced dramatically different landforms over disparate intervals of time. These contrasting hydrologic processes and time spans impart important geologic lessons about how landscapes evolve.

Both geologic sites are subject to restricted access, and entrance fees are required. The Spillway Gorge is on U.S. Army Corps of Engineers property, and docent-led tours are administered by the Gorge Preservation Society (GPS) under the aegis of the Guadalupe–Blanco River Authority. Natural Bridge Caverns is a commercial cave, and group tours are offered under the direction of a professional guide. Further details are available on their respective websites.

This guidebook begins with a road log for the entire excursion that starts and ends in Austin. Specific locations along the route are keyed to mileages presented in the road log to aid navigation and provide on-ground reference points for running commentaries about points of geologic, geographic, cultural, or historical interest. After the road log, separate articles present guided tours for each of the two stops (Stop 1 is the Spillway Gorge and Stop 2 is Natural Bridge Caverns). An appendix provides a summary of geochemical processes involving the work of water on limestone terrains. The book closes with a glossary of geologic terms.