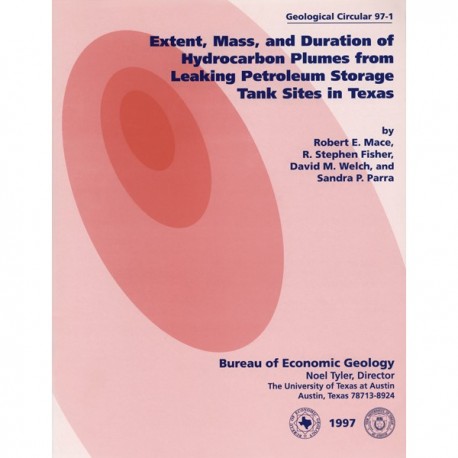 To purchase this publication as downloadable PDF, please order GC9701D.

ABSTRACT
Of the more than 19,000 documented leaking petroleum storage tank (LPST) sites in Texas, more than 6,000 have impacted ground water and resulted in fuel hydrocarbon (FHC) plumes. The sheer number of regulated facilities and their wide geographical distribution throughout the state, however, have made gaining a regional perspective on hydrocarbon plumes difficult. A better overall understanding of the extent, mass, and duration of hydrocarbon plumes may make it possible to exercise more scientifically based decisions regarding the level of remediation needed for the thousands of LPST sites still in the corrective action program.

This study is the first attempt to quantify the general site, soil, hydrogeologic, and plume characteristics throughout Texas and in different regions of the state. This study consisted of compiling and summarizing LPST site information and quantifying the size, mass, and durationof dissolved FHC (benzene) plumes in Texas in order to determine dimensions of benzene plumes, predictability of plume concentrations and lengths, rates at which plumes self-remediate, and classification of plume behavior to assist in exposure assessments.
This study focuses on ground-water impacts from underground leaks of fuel hydrocarbon. We do not address the impact of hydrocarbon vapors in buildings or utility lines, seepage into or through utilities, and discharge of fuel hydrocarbons into springs and streams owing to leaks from underground storage tanks, all of which are important avenues of hydrocarbon migration that might directly impact human health and safety.

We compiled site, soil, hydrogeologic, and chemical analytical information from files at the Texas Natural Resource Conservation Commission (TNRCC) on 605 LPST sites and entered the information into a data base. The resulting data base contains more than half a million entries including chemical and water-level data on more than 4,000 monitoring wells. Using well location, water-level, and chemical data, we determined hydraulic gradients, ground-water flow directions, average plume benzene concentrations, and benzene plume dimensions over time for different hydrogeologic and climatic regions of Texas. We summarized site descriptive data using nonparametric statistics, histograms, and pie charts. Most benzene plumes (75 percent) caused by leaking underground fuel tanks are less than 250 ft long and impact an area of less than 49,000 ft2 as defined by the 10-ppb contour of benzene. Mass and size of benzene plumes follow three to four predictable stages. Even without remediation, plume mass increases, stabilizes, and rapidly declines over time. Plume length similarly increases and stabilizes but then at first slowly declines and later rapidly declines. Declines in plume mass and length result from natural attenuation processes (for example, volatilization, sorption, and biodegradation) or remediation activities or both.  Most plumes we analyzed have stabilized or are decreasing in length and concentration. Only 14 percent of plumes are increasing in concentration, and only 3 percent are increasing in length.

The length of a benzene plume cannot be predicted on the basis of either hydrogeology or previous remediation activities. There is no statistical difference in benzene plume length between plumes in different hydrogeologic settings throughout Texas. However, karst aquifers such as the Edwards aquifer are probable exceptions. Limited data suggest that plume length in the Edwards aquifer can be significantly greater (more than 7,600 ft) than in other hydrogeologic settings. Likewise, we could not statistically sort benzene plume length between sites on the basis of pump-and-treat or other previous remediation activities. Source abatement and plume remediation, however, logically should shorten the time required to decrease plume length and concentration. Other factors, such as the amount of spilled and leaked fuel and natural attenuation processes, probably account for more differences in plume length than hydrogeology or previous remediation activities. Data on the timing, duration, and magnitude of the leak and biodegradation and other attenuation rates, unfortunately, are generally unknown or not measured for LPST sites in Texas. Because these data are unknown, we cannot predict the timing at which the different stages might occur for benzene plumes in the corrective action process. Risks associated with dissolved hydrocarbon plumes include threats to water wells; direct human contact with hydrocarbon, hydrocarbon vapors, or impacted soils; and explosive risks of hydrocarbon vapors. Almost 40 percent of sites have benzene plumes that reportedly extend offsite and impact either high-quality ground water or water that has a demonstrated; beneficial use. Almost 60 percent of sites have at least one public or domestic water-supply well within 0.5 mi of the leak. Because of these exposure risks, characterization of LPST sites is required to determine the lateral extent and stage of the plume and to identify potential nearby receptors such as water wells. However, because plumes appear to attenuate naturally, active remediation such as pump and treat might be required only in special cases to prevent a plume from impacting nearby receptors or to reduce a plume that has already impacted a receptor. These findings apply to clastic (sand, clay, sandstone, shale) formations. Active remediation might be required more regularly for benzene plumes in karst aquifers such as the Edwards aquifer, where plumes have the potential to become longer and thereby pose greater risk.