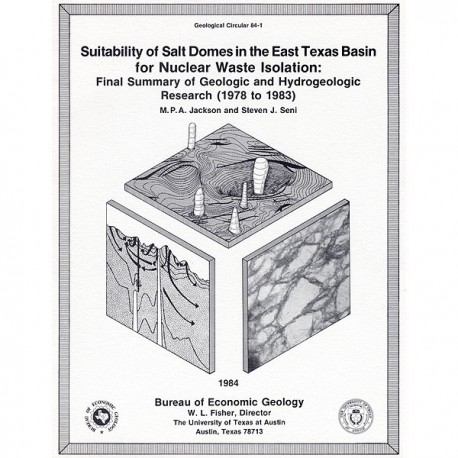 
To purchase this publication as a PDF download, please order GC8401D.

ABSTRACT
This report summarizes results of the East Texas Waste Isolation (ETWI) program from January 1, 1978, to March 30, 1983. Having an extensive data base, the study comprised 33 different lines of research by 67 scientists and research assistants. The program included both basinwide and site-specific (mainly around Oakwood Dome) studies that used surface and subsurface data.

Mesozoic opening of the Gulf of Mexico accompanied thermal processes that controlled sedimentation during filling of the East Texas Basin. The basin contains as much as 7,000 m (23,000 ft) of shallow-marine and continental sediments overlying the Louann Salt. Deformation in the basin resulted from subsidence of its floor and gravitational flow of salt and from salt loss in the subsurface and at the surface. Regional studies have defined the present-day distribution of salt structures and the growth history of domes. The East Texas Basin is divided into four provinces on the basis of the shape of salt structures. Five forces that make salt flow operated from near surface to the deepest parts of the basin to form these structures. Salt flow began in pre-Gilmer (Late Jurassic) time with the growth of salt pillows. Three groups of diapirs can be differentiated on the basis of age and distribution. The growing salt structures affected topography, thereby influencing depositional facies and resulting in deposition of low-permeability facies around the salt stocks.

Rates of dome growth declined exponentially with time to rates of less than 0.6 m/104 yr. Geomorphic evidence does not preclude Quaternary uplift over Oakwood Dome, but its southern flank may have subsided. All regional fault systems in the basin appear to be related to slow gravitational creep of salt downward toward the basin center or upward into salt pillows and diapirs. Nevertheless, at least eight probable earthquakes were recorded near the southern margin of the basin in 1981 and 1982, and their probable focus, the Mount Enterprise fault, is poorly understood.

The following conclusions were drawn from geologic study of a core drilled from Oakwood Dome: Salt core from the dome is more than 98 percent pure halite (anhydrite is the only other mineral present). The rock salt displays evidence of two distinct periods of recrystallization. Geometric analysis and strain analysis suggest that the crest of the dome was truncated, probably by ground-water dissolution, during the formation of anhydrite cap rock. Diapiric rise of salt formed a tight contact between salt and cap rock. The cap rock formed in a deep saline environment and appears to be a low-permeability barrier to dome dissolution.

Two major aquifer systems lie above and below the hypothetical repository level in the dome: the Wilcox-Carrizo fresh-brackish aquifer system above and the Woodbine saline aquifer below. Only the five shallowest domes have saline springs and are thus poor sites for potential repositories. The geochemistry of false cap rock over two of these domes suggests that this alteration may be due to upward discharge of deep-basin brines.

Of the domes that penetrate the Wilcox-Carrizo aquifer system, only Oakwood Dome has a slightly brackish plume, possibly caused by salt dissolution. None of the salt domes shows evidence of extensive exposure to circulating ground water. The salt domes are isolated at least partly by low-permeability cap rock and mud-rich facies.

Regional circulation in the Wilcox-Carrizo aquifer system correlates closely with topography and geologic structure. A potential for downward flow prevails except beneath the Trinity and Sabine River drainage systems. Potential for downward flow between the Wilcox-Carrizo and the Woodbine aquifers is due to marked basinwide pressure declines in the Woodbine caused by oil and gas production.

As Wilcox-Carrizo ground water moves from recharge to artesian sections, it evolves from an acidic, oxidizing, Ca-Mg-HC03-S04 water to a basic, reduced, Na-HC03 water. Dating of the ground water by 1% methods indicates ages of lo3 yr in recharge areas to 1.5 x 104 yr in the artesian section.

Three-dimensional modeling of ground-water flow in the Wilcox-Carrizo aquifer near Oakwood Dome shows that the stratified sand-mud fabric causes poor vertical connection of sand bodies and very low (~ 10-3 to 10-4) ratios of vertical to horizontal hydraulic conductivity.

Rates of vertical ground-water flow are only 11 m/104 yr. Ground-water travel times from Oakwood Dome to potential discharge areas are approximately 104 yr in well-connected channel-fill sand bodies and 105 to 106 yr in poorly connected interchannel facies. These interchannel facies constitute large potential aquitards. Realistic modeling of flow rates in the Wilcox or in similar aquifers requires incorporation of data on sand-body geometry and interconnection.

The Woodbine aquifer is the shallower of the two deep saline aquifer systems surrounding salt domes immediately below the hypothetical repository level. Mixing of deep saline waters with the overlying fresh-water system is limited.