> Books & Reports>Reports of Investigations>RI0003. Successional Speciation in Paleontology: The Case of the Oysters of the Sellaeformis Stock 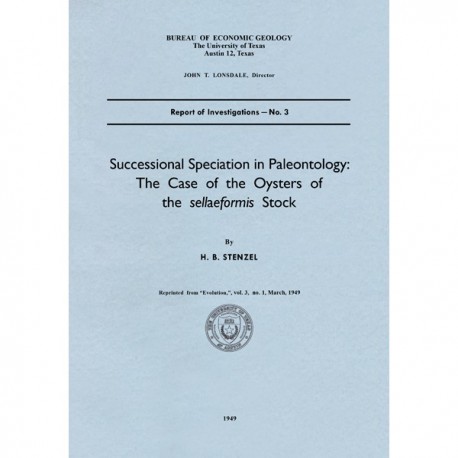 RI0003. Successional Speciation in Paleontology: The Case of the Oysters of the Sellaeformis Stock

Excerpted:
The successional mode of speciation of Julian Huxley (1942) may be defined as gradual transformation of one species into a successor species, or several of them, during the course of geologic time without primarily involving geographic, ecologic, or adaptive segregation. The purpose of this paper is to present a particular case of such a mode of speciation and to discuss problems involved therein. The example chosen is the stock of Cubitostrea sellaeformis (Conrad) [Mollusca, Pelecypoda], which contained 4 separate successional species of oysters and lived in Middle Eocene time in the ancient Gulf of Mexico.

Citation
Stenzel, H. B., 1949, Successional Speciation in Paleontology: The Case of the Oysters of the Sellaeformis Stock: The University of Texas at Austin, Bureau of Economic Geology, Report of Investigations No. 3, 17 p.