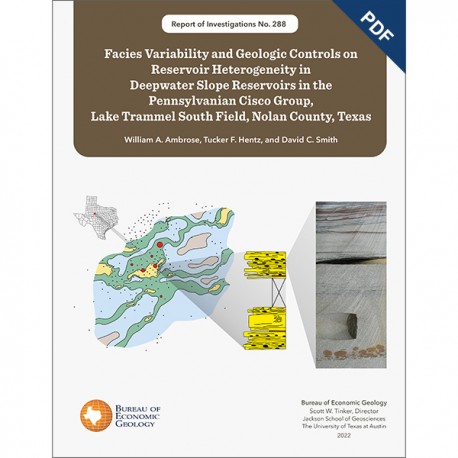 "In my opinion [Report of Investigations No. 288] is a very well written report with high-quality graphics. It clearly documents the slope channel reservoir complexes from well correlations and core-based facies interpretations, controls on heterogeneities, and highlights the remaining development and exploration potential in undrilled channels.  As such, RI 288 should be a key reference for those interested in the Pennsylvanian depositional systems in the Eastern Shelf for either further hydrocarbon development and/or better understanding the depositional facies and stratigraphy."

Deepwater slope deposits in the Virgilian-Wolfcampian Cisco Group in Lake Trammel South field in Nolan County, Texas, have produced oil and gas since the early 1950’s. Nevertheless, the field and adjacent areas have the potential for additional development. Many lenticular and discontinuous reservoir-sandstone bodies in the field have not been adequately contacted by existing wells. Cisco channel systems in Lake Trammel South field were deposited in an unconfined slope setting. Reservoir-sandstone bodies in Lake Trammel South field occur in narrow (commonly 500 to 3,000 ft [150 to 900 m]), sinuous, and anastomosing trends composed of fine-grained sandstone beds. They are bounded by extensive areas of very fine to fine-grained levee and overbank deposits that pinch out into mudstones and siltstones. In addition, thin (<2 ft [<0.6 m]), minor carbonate debris-flow deposits are sparsely interbedded with clastic deposits in the field. Together with thin (millimeter-scale), mudstone-draped bedforms in clastic-dominated facies, these carbonate debris-flow deposits impart a high degree of vertical heterogeneity to Cisco reservoirs. Reservoir heterogeneity in the Cisco Group in Lake Trammel South field occurs at a variety of scales: microscale, mesoscale, and macroscale. Microscale heterogeneities occur at the scale of individual bedforms, bedform boundaries, lithology changes at erosional contacts, and from sediment mixing in debris-flow and slump deposits. Mesoscale reservoir heterogeneities are controlled by vertical trends in lithology (stacking patterns) and laterally by channel-fill pinch-outs. Macroscale heterogeneities occur at the largest possible scale in Lake Trammel South field. They are defined laterally by the distribution of slope–channel complexes and associated levee and overbank deposits within individual depositional cycles and vertically by the aggregate stacking patterns of slope–channel depositional axes. These aggregate stacking patterns record autocyclic channel-lobe switching within individual slope–channel complexes. The value of this study for oil and gas exploration in the Cisco Group in Lake Trammel South field and adjacent areas is threefold: it (1) resolves the Cisco stratigraphic succession into a set of 14 depositional units, thereby displaying the net-sandstone geometry and paleogeography of individual slope depositional episodes, as well as documenting the stratigraphic evolution of deepwater systems in the area. It also (2) depicts the distribution of previously producing wells within each of these 14 depositional units and relates oil and gas productivity to different deepwater slope facies. Additionally, it (3) provides a framework for future exploration by projecting multiple sandy depositional axes into sparsely drilled or undrilled areas beyond current field limits.