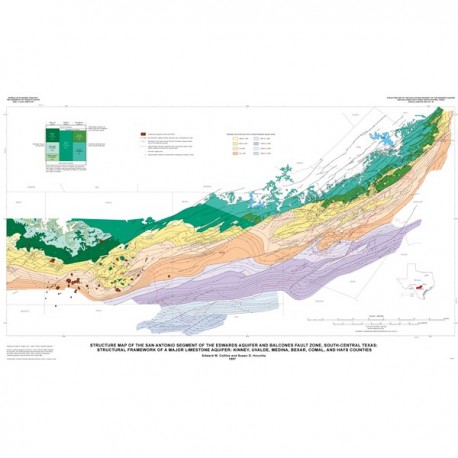 Structure Map of the San Antonio Segment of the Edwards Aquifer

For a downloadable, digital version: MM0038D.


To purchase this publication as a PDF download, please order MM0038D.


About This Publication
Normal faults of the Balcones Fault Zone are the principal structural control on the important Edwards limestone aquifer and recharge zone, currently the sole source aquifer of San Antonio, Texas, and many other municipalities in Central Texas. The San Antonio segment of the aquifer, extending over an area of approximately 3,000 mi2 in Kinney, Uvalde, Medina, Bexar, Comal, and Hays Counties, is the main water resource for residential, agricultural, and industrial use in Bexar, Medina, and Uvalde Counties.

The authors used an updated subsurface data base and recent comprehensive surface geologic mapping conducted by the senior author, however, to illustrate the structure at a scale that provides more detail than that of any map previously available. The authors are thus able to make new interpretations on fault occurrence, throw, and geometry. The accompanying booklet summarizes key elements of the Edwards aquifer's structural framework and describes structural attributes that affect aquifer recharge, ground-water flow, areal extent, and depth.