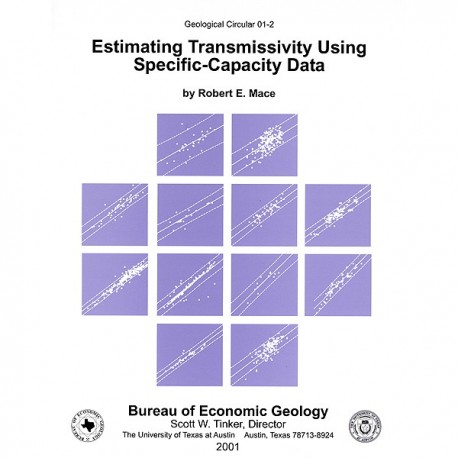 To purchase this publication as a  downloadable PDF, please order GC0102D.

About This Publication
This circular categorizes, summarizes, recommends, and provides insights into the different techniques available for relating specific capacity to transmissivity. It comprises work performed for the Edwards Aquifer Authority, the Texas Water Development Board, the Lower Colorado River Authority, and the Texas National Research Laboratory Commission.

Solutions Based on the Dupuit-Thiem Equation

Solutions Based on the Theis Nonequilibrium Equation

Including Tests Having No Reported Pumping Time or Well Radius

Including Tests Having No Measurable Drawdown

Appendix A. Estimating transmissivity from specific-capacity data using the Theis and others equation inside a spreadsheet

1. Data from a pumping test on a well completed in a confined aquifer

3. Time for water levels to stabilize after initiation of pumping as a function of transrnissivity and storativity

4. Relationship between transmissivity and specific capacity for alluvial and fractured hard-rock aquifers using Thomasson and others approach

5. Sensitivity of specific capacity to variation in transmissivity and a parameter, C', that incorporates effects of pumping time, well radius, and storativity

6. Example of an empirical relationship between transrnissivity and specific capacity for a karstic aquifer in Texas showing the best-fit line and the 95-percent prediction intervals for the linear fit and the best-fit lines for second- and third-order polynomials

9. Relationship between measured specific capacity and pumping rate in the Edwards aquifer

14. Comparison between measured well loss and well loss estimated from an empirical relationship between specific capacity and well-loss constant and pipe-flow theory

15. Production rates for specific-capacity tests in the Edwards aquifer where there was no measurable drawdown

16. The minimum production rate required to produce at least 1 ft of drawdown for a given transrnissivity, assuming a production time of 8 h, a well radius of 4 inches, and a storativity of 10-4

17. Empirical relationship between transrnissivity and specific capacity for the Carrizo-Wilcox aquifer of east-central Texas

18. Error comparison between the empirical approach and the analytical approach to estimating transmissivity from specific capacity in the Carrizo-Wilcox aquifer of east-central Texas

1. Summary of empirical relationships between specific capacity and transmissivity

A-1. Example spreadsheet for calculating the Theis and others equation