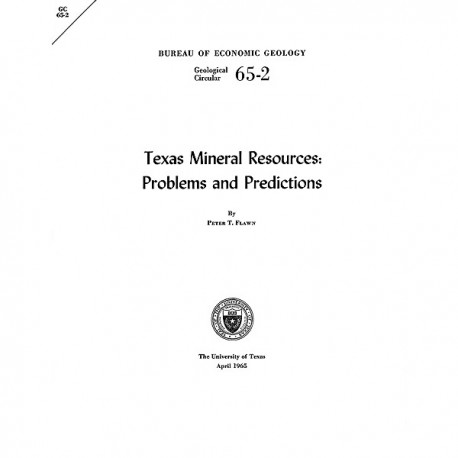 
To purchase this publication as a downloadable PDF, please order GC6502D.

Excerpted from an address to the Governor's Conference on Natural Resource Management and Development in Texas, Dallas, Texas, October 16; 1964:
When a reference is made to the mineral resources of Texas, most people think of oil and gas, and some few also of sulfur. And, of course, it is true that of the whopping $4.4 billion dollars’ worth of minerals produced in Texas in 1963, 92% was oil, gas, and natural gas liquids. In 1963, for the 29th year, Texas led the Nation as a producer of minerals. Value of mineral products was twice the value of agricultural products, equal to the value of manufactured products, and equal to about one-half the value of all retail trade. It is clear that the State has a mineral-oriented economy; it is true also that the mineral industry is distributed broadly throughout the State and not concentrated in several giant oil fields or very large mines--241 of 254 counties reported mineral production in 1963.

The today of Texas mineral resources

The yesterday of Texas mineral resources

The tomorrow of Texas mineral resources