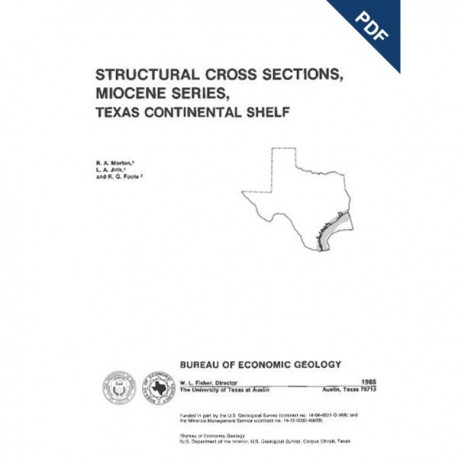 
About This Publication
These cross sections numerically correspond to previously published onshore cross sections (CS0002--Dodge and Posey, 1981) and extend those sections across the continental shelf into the Miocene, a recent target of renewed petroleum exploration. Lithostratigraphic markers, corresponding to ommonly used paleontological markers, have been used to correlate and subdivide the Miocene Series, which constitutes the largest volume of sedimentary fill in the offshore western Gulf Coast Basin. The structural and stratigraphic framework was interpreted using commercially available electric logs and paleontological reports.

These basic data were supplemented with published information and with proprietary data released by operators for this study. Locations of major growth faults and diapirs, fault displacements, and bed attitudes were incorporated into a few sections from proprietary and publicly available seismic profiles. Subsurface formation temperatures plotted for most wells on the cross sections were derived from well log headers where bottom-hole temperatures are recorded. Wells that were completed in hydrocarbon-bearing zones are indicated on the cross sections by conventional oil-and gas-well symbols.

An 8-page text accompanying the cross sections briefly discusses the Miocene sediments. A generalized stratigraphic cross section in the text shows the relationships among onshore formations, principal offshore lithofacies, biostratigraphic zones, and depositional sequences of the Oligocene and Miocene Series. Other text figures illustrate the major producing trends of offshore Texas and adjacent Federal waters as well as the principal tectonic features and salt structures beneath the offshore areas and Coastal Plain.

The study was funded by the U.S. Geological Survey, the Minerals Management Service, and the Bureau of Economic Geology.