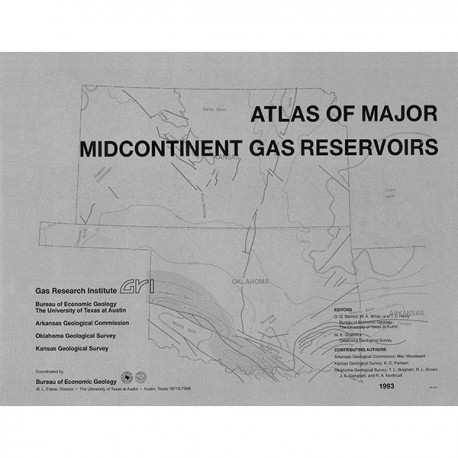 For a downloadable, digital version: AT0007D.


About This Publication
Third in a series of atlases that began in 1989, this atlas documents principal geologic and engineering characteristics of 530 natural gas reservoirs in Oklahoma, Kansas, and northern Arkansas, each of which produced at least 10 billion cubic feet of natural gas. Diversely recorded production and engineering data from reservoirs in these states have been recast in a unified format and used to categorize reservoirs into 28 plays on the basis of geologic attributes such as lithology, geologic age, trap type, and depositional environment. Combining major reservoirs into plays provides insight into how to extend productive trends and apply new resource technology to increase supplies of natural gas. Staff from the Bureau of Economic Geology (BEG) coordinated the organization and production of this report; data were compiled as a cooperative effort of the geological surveys from the three Midcontinent U.S. states: Arkansas, Kansas, and Oklahoma.