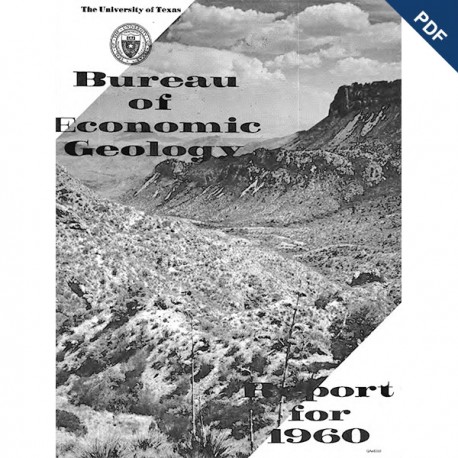 From the front matter
With the close of 1960, the Bureau of Economic Geology of The University of Texas completed its 52nd year of research and public service in geology. As a research unit of the University, the Bureau carries out the functions of a State Geological Survey and its Director fills the position of State Geologist.

The Bureau is engaged in both basic and applied geologic research and acts as a public information agency on mineral facts and problems in Texas. It also compiles and publishes geologic maps with or without accompanying text, carries on studies in all fields of geology, particularly in economic geology, stratigraphy, and structural geology, and supports graduate instruction in geology at The University of Texas. The Mineral Technology Laboratory of the Bureau is a departmental analytical and testing laboratory concerned with commercial applications of Texas raw materials. The Well Sample Library maintains a collection of well samples and cores from all over the State which are accessible for study at the Library.

Although Texas' annual mineral production has a gross value of more than 4 billion dollars, the Bureau of Economic Geology is small compared to similar organizations in many other states  Publications of the Bureau cover all aspects of Texas geology; a list of reports and maps is available free on request.