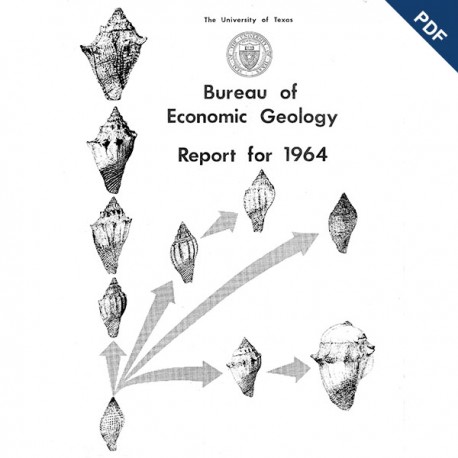 
About the Bureau
The Bureau of Economic Geology is one of the organized research bureaus of The University of Texas. Established in 1909, it has for 55 years carried out the function of a State Geological Survey; its Director fills the position of State Geologist. The Bureau is engaged in a four-point program of research and public service in earth science and Texas mineral resources as follows: (1) basic geological research, (2) geology applied to resource and engineering problems, (3) systematic geologic mapping, and (4) public-service mineral information, identification and testing, and compilation of mineral statistics. The Bureau participates in other University research efforts in the fields of resources and earth sciences, such as the Center for Research in Water Resources. As a part of its effort, the Bureau publishes major reports in The University of Texas Publication series; it also has its own series of Reports of Investigations, Geologic Quadrangle Maps, Guidebooks, and Mineral Resource Circulars. The Guidebooks include non-technical publications of general interest.

The basic geologic data developed by the Bureau of Economic Geology in the form of scientific reports and geologic maps are used by many State and Federal organizations in carrying out investigations in the public service. These include the Texas Water Commission, Railroad Commission of Texas, Parks and Wildlife Department, Texas Highway Department, Texas Industrial Commission, and numerous other State boards, conservation organizations, water districts, and Chambers of Commerce. The Bureau also cooperates formally and informally with Federal agencies, such as the Geological Survey, Bureau of Mines, Bureau of Reclamation, Corps of Engineers, and National Park Service. The mineral and geological information service offered by the Bureau of Economic Geology is used by public and private groups, corporations, and citizens through correspondence and conference.

As a result of growing interest in outdoor recreation, nature study, and tourism, the Bureau has over the past five years attempted to tell the geologic story of Texas through a series of popular guidebooks. Two general guides--Texas Fossils, and Texas Rocks and Minerals, published in 1960 and 1964--are "best sellers" and are used as source material by elementary and secondary school teachers. The Geologic Story of Longhorn Cavern was told in a guidebook published in 1963. Other such guidebooks are being prepared.