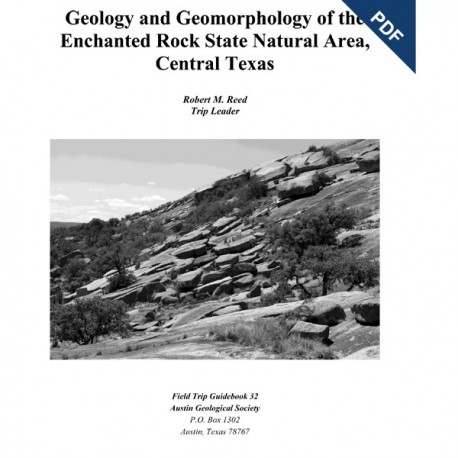 
From the Preface
Enchanted Rock lies along Ranch-to-Market Road 965 approximately halfway between Fredericksburg and Llano. It is the most prominent of several exfoliation domes and related granite features that crop out in this area. Elevation at its crest is 1825 ft above mean sea level, and it rises about 450 ft above Sandy Creek, which flows along the southeastern margin of the batholith. It is an iconic geologic and geographic feature of Central Texas, and it has inspired awe as long as humans have been here to witness it. The very name, Enchanted Rock, derives from the mysterious (perhaps mystical) properties vested in the feature by the earliest people to visit it. But regardless of its reputation for the mysterious, Enchanted Rock is widely recognized as a magnificent natural feature as well as a historical site. It was designated a National Natural Landmark in 1970 (by the National Park Service), and it was placed on the National Register of Historic Places in 1984. Enchanted Rock State Natural Area was established in 1984 under the aegis of the Texas Parks and Wildlife Department (TP&WD).

Enchanted Rock offers lessons in geology, geography, and ecology. It also poses enigmatic questions that point the way to future investigations. It provides a window into the deep reaches of the Earth’s crust, and it offers clues to the evolution of the North American continent in the deep past. Among the enigmas, there is the question of topography and relief: Why do exfoliation domes stand tall in a few localities? In contrast, across most of the Llano Uplift, the granites generally have been weathered to grus and eroded to low topographic levels adjacent to fault-bound “mountains" of Paleozoic strata. And rimming the Precambrian and Paleozoic outcrops are the high-standing edges of the Edwards Plateau, which once extended unbroken across the Llano Uplift. It is a geologic conundrum: a structural uplift composed of the (presumed) most durable of bedrocks is expressed as a topographic basin.