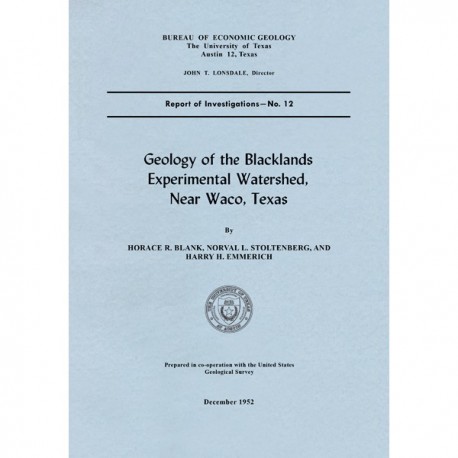 RI0012. Geology of the Blacklands Experimental Watershed, Near Waco, Texas


To purchase this publication as a downloadable PDF, please order RI0012D.

ABSTRACT
The Blacklands Experimental Watershed, a hydrologic research project of the Soil Conservation Service located about 15 miles southeast of Waco, Texas, is underlain by marls and chalks belonging to the Taylor group of the Gulf series of the Cretaceous system, which, in conformity with the general structure of the Gulf Coastal Plain, dip east-southeastward at an angle a little steeper than the general slope of the land surface.

The lowest strata cropping out in the experimental watershed are part of the Wolfe City member of the Taylor marl and consist of about 110 feet of sandy marl containing numerous small lenses of hard calcareous sandstone. They are transitional upward into about 40 feet of silty marl, in which the sand or silt is too fine to be visible to the unaided eye.

Overlying the silty marl is a stratum of hard chalk, 8 to 25 feet thick, belonging to the Pecan Gap member of the Taylor marl. There is some evidence that the chalk—silty marl contact is an unconformity. This contact is the only easily identified stratigraphic marker in the experimental area. The chalk is hard enough to have some effect on the topography and the soil depth and brittle enough to influence greatly the distribution of the ground water.

The chalk is transitional upward into 90 to 100 feet of highly calcareous marl. Near the southeast corner of the experimental area this marl grades upward into another zone of about 13 feet of soft chalk, which in turn passes transitionally upward into additional highly calcareous marl. Remnants of an upland gravel, consisting merely of pebbles and cobbles scattered in the soil, occur on a few of the hilltops in the southwest corner of the experimental area and probably belong to the Uvalde (Pliocene?) formation. The valleys of Brushy Creek and its principal tributaries are partly filled with terrace alluvium consisting entirely of transported marl mixed with sand and pebbles and believed to be Pleistocene in age. Near the present stream channels there are also deposits of Recent alluvium consisting chiefly of transported soil.

The boundary between the Pecan Gap lower chalk and the Wolfe City silty marl is traced from Big Creek near Mart through the experimental watershed to Brazos River southwest of Marlin. It is shown that most of the chalk outcrops in this region described by other investigators correspond to the less definite upper chalk rather than to this lower zone. The Pecan Gap belt of outcrop as shown on the [U.S. Geological Survey’s 1937] geologic map of Texas (Darton et al., 1937) is too narrow and too far east to include both these chalks. At some places it has been based on the lower zone, at others on the upper.

General features of the experimental watershed

Rocks of the experimental watershed
Areal distribution of the geologic units

Terraces of the Brazos River

Decay of the rocks

Relation between parent rocks and soils