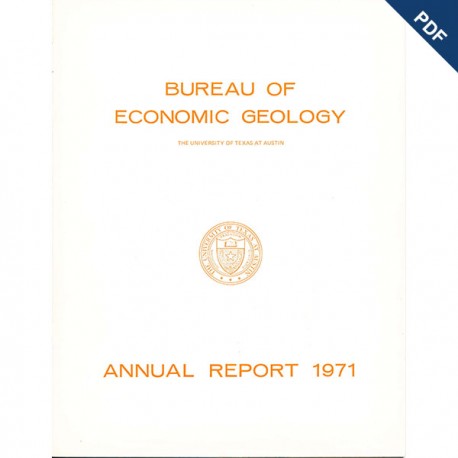 
About the Bureau (from the report)
The Bureau of Economic Geology is a research bureau of The University of Texas at Austin; it also functions as a State agency. Established in 1909, it has for 63 years been recognized as the Texas State Geological Survey; its Director fills the position of State Geologist.

The Bureau is engaged in research and public service in Texas geology. It carries on basic research to further understanding of the geology of and the natural earth processes that operate in the State. The applied program is focused on earth resources, environmental and conservation problems, and engineering
problems. The Bureau's efforts in systematic geologic mapping are designed to produce geologic and special derivative maps at several scales for all those concerned with resources and land use in Texas. The Bureau participates in other University research efforts in the fields of resources and earth sciences including those of the Center for Research in Water Resources and the Marine Science Institute at Port Aransas. These two organizations, with the Bureau, constitute The University's Division of Natural Resources and Environment.

The Bureau publishes major reports in The University of Texas Publication series and maintains its own series of Reports of Investigations, Atlases, Geologic Quadrangle Maps, Geological Circulars, Mineral Resource Circulars, and Special Publications.

The geologic data developed by the Bureau of Economic Geology in the form of scientific reports and geologic maps are used by many State and Federal organizations in carrying out investigations in the public service. The Texas Water Development Board, Texas Highway Department, Parks and Wildlife Department, Texas Industrial Commission, Railroad Commission, The General Land Office, Interagency Natural Resources Council, and numerous other State departments, boards, conservation organizations, water districts, councils of government, and chambers of commerce utilize Bureau publications and services on both a formal and informal basis through interagency contracts and staff conferences. The Bureau also cooperates with Federal agencies, such as the Geological Survey, Bureau of Mines, Bureau of Reclamation, Corps of Engineers, and National Park Service. The mineral and geological information service offered by the Bureau of Economic Geology is used by public officials, private groups, corporations, and citizens through correspondence and conference.